Five seniors from Coppin Academy, Green Street Academy, Academy for College and Career Exploration (ACCE), or Baltimore Polytechnic Institute will receive full-tuition scholarships for all four years at McDaniel, a value of more than $160,000

Representatives from McDaniel College, Baltimore City Public Schools, and the CollegeBound Foundation will travel to the students’ high schools to make surprise announcements on Monday, April 4, starting at 9:30 a.m.

WHO, WHEN, AND WHERE:
Monday, April 4

(note: times are approximate, and each stop is planned for approximately 30 minutes) 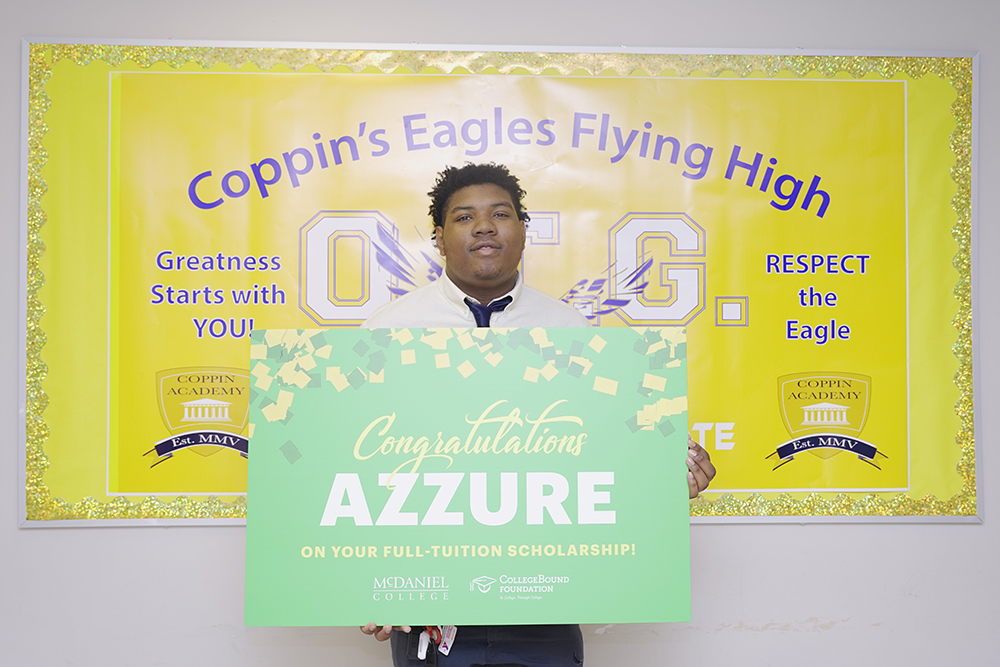 -Azzure Brooks, a senior at Coppin Academy, has been focused on making the most out of his high school experience. He is ranked third in his class with a 3.8 GPA while completing six dual enrollment courses in his senior year. Azzure has participated in his school’s AVID and TRIO Upward Bound programs to prepare for college. He is also a four-year member of his high school’s basketball and track and field programs. In addition, he is a mentor to younger scouts, earning an Eagle Scout, the highest rank in Boy Scouts. 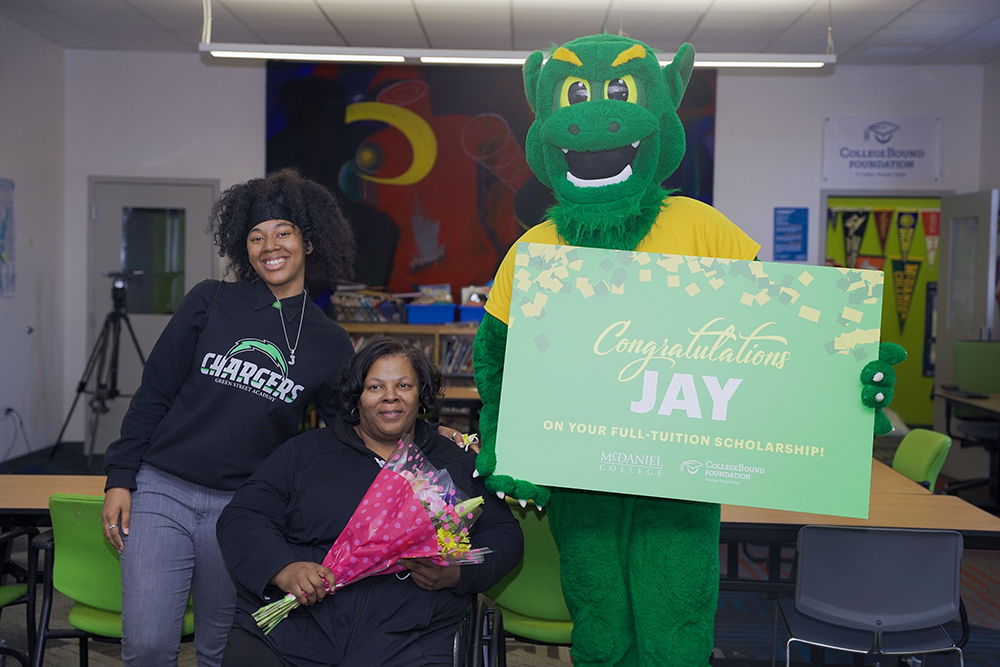 -Jay Artis, a senior at Green Street Academy, is valedictorian of her senior class, earning a 4.15 GPA. A leader at her high school, she serves as vice president of her senior class, class representative of the National Honor Society, editor of the yearbook, and a class ambassador. She was highlighted as a CollegeBound Foundation “Scholar of the Week.” Jay is committed to her community and is interested in going into the field of psychology to be a source of support to those struggling with their mental health. 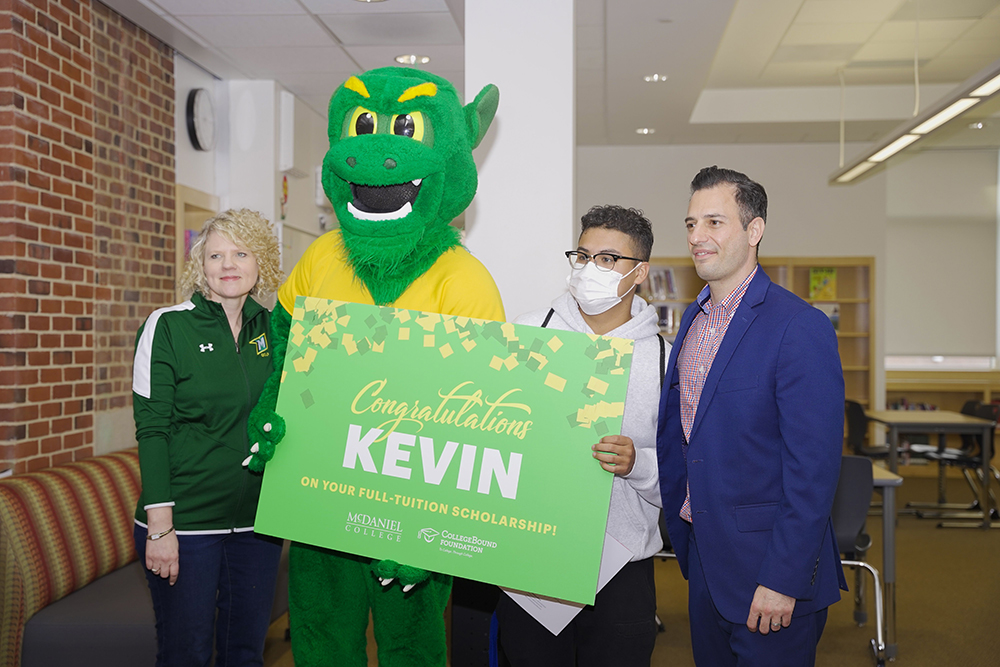 -Kevin Quintanilla, a senior at the Academy for College and Career Exploration, has completed his school’s most rigorous curriculum and is ranked second in his graduating class with a 4.15 GPA. In addition to his academic achievements, he works part-time, is active in his church, plays guitar and piano, and is part of Building STEPS (Science, Technology and Education Partnerships), which supports Baltimore City students looking to go into STEM careers. Kevin is a proud first-generation college student and a dedicated son and brother who does everything he can to support his family. He aspires to work in the health care field. 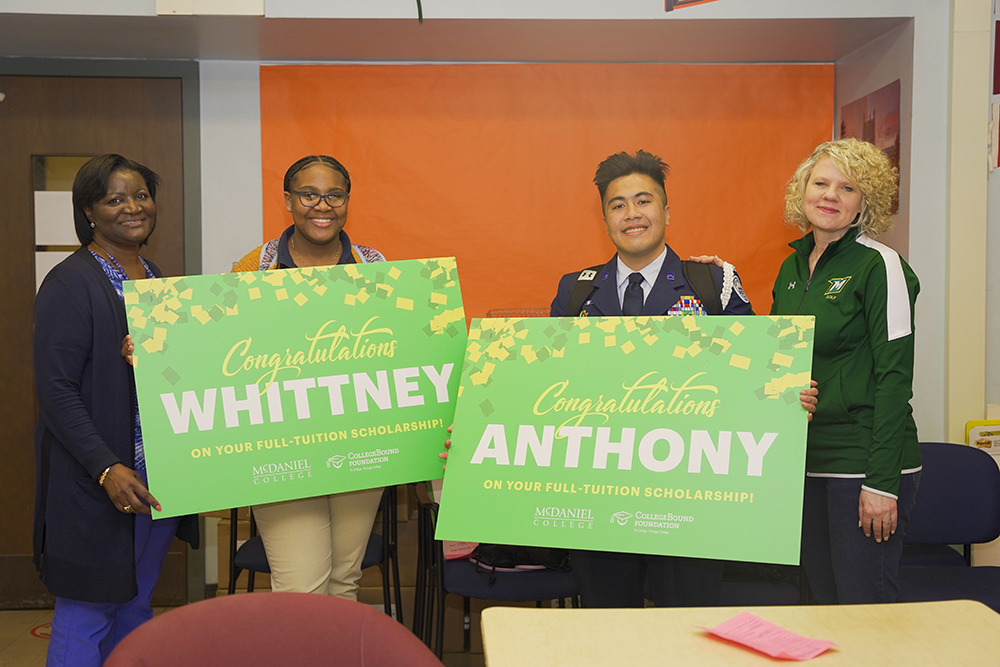 -Whittney Patterson, a senior at Baltimore Polytechnic Institute, has been part of Polytechnic Institute’s Ingenuity Project since 6th grade. She has earned a 4.38 GPA in nearly all Honors/AP courses while serving as co-section leader for her school’s marching and concert band. She is also a member of the TRIO Upward Bound program. Whittney works part-time and is a dedicated big sister who wants to inspire her siblings by showing them that hard work pays off. Her counselor describes her as someone who wants to see those around her thrive and her teachers know that her dedication to hard work will help her achieve her goals.

-Anthony Pitogo is a senior at Baltimore Polytechnic Institute, who came to the U.S. from the Philippines less than a decade ago. At Baltimore Polytechnic Institute, he has a 4.5 GPA and has taken a full Honors/AP curriculum. Anthony is a drill commander in the Air Force Junior Reserve Officer Training Corps (AFJROTC) program and has participated in track and field, as well as the Chess Club. He is also active in his church and looks towards a career in the military to serve his community.